YOU CAN TAKETO THE FIELD 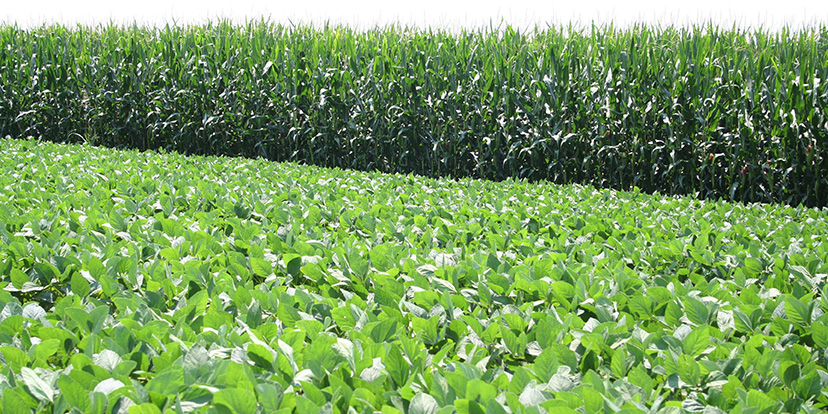 Plan on at Least One Fungicide Application for Corn and Beans

“The last few years, farmers have shifted from a scout-to-spray mindset to a recognition that they need to plan on a fungicide application for corn and soybeans to achieve their high yield goals,” says Robby Meeker, an LG Seeds agronomist in East Central Illinois.

“Most of the farmers in my area now incorporate fungicide applications into their budget plans,” he says.

Why the mindset shift?

“Our approach five years ago was scout to spray. But farmers' recent experience using fungicides convinced many to plan on using fungicide for both corn and soybeans, rather than waiting for scouting results,” Meeker says. Some of that mindset change is also driven by a better understanding of a plant’s potential.

Meeker recalls his father and grandfather thinking the corn crop was done once it had made an ear. “Now, we want corn to stay green and healthy even through the final maturity growth stage at R6 to pack as much starch as we can into that kernel, increasing its size and weight to build yield,” he says.

“Farmers see they can realize more of a seed’s yield potential thanks to the added protection of fungicide,” Meeker says, adding he has often witnessed treated corn outperform untreated corn.

The protection a fungicide offers also allows soybean plants to flourish.1 In fact, studies have shown an average of a 4.1 bushel per acre increase in soybean yields when foliar fungicides are applied.

That impact is especially pronounced when it’s combined with an insecticide, Meeker says.

An influx in new products has also helped shift attitudes on fungicides. “Since 2020, we’ve seen an upgrade, with companies bringing out new modes of action and longer-lasting residuals that have helped with consistency of response,” Meeker says.

Those new modes of action are also positive given concerns about fungi becoming resistant to fungicides. Find answers to frequently asked questions about resistance and tips for delaying resistance here.

Plan for one application and scout from there

Farmers should plan on making one fungicide application to corn at tasseling and then scout from there, keeping in mind your fungicide’s 30- or 45-day residual. An optimal time for that first application is “when you start to see a tint of brown to the silks,” Meeker elaborates.

But he adds that in a year with a lot of humidity, fog and dampness, an earlier application right as tassels are coming out but before we’re pollinating may be beneficial.

During a high-pressure year, Meeker says farmers should “definitely consider a second application post-pollination,” urging them to be proactive in their response to any disease re-emergence. But they should also pay attention to the pre-harvest interval restrictions, especially if the farmer plans on chopping silage.

For soybeans, Meeker recommends a similar approach. “I would plan on one application at the R3/R4 growth stage but scout to see if an additional application is needed.” If it’s a higher stress year for the Corn Belt or if there are a lot of hurricanes that blow frogeye leaf spot up from the South, Meeker says a second application will likely be needed.

For either crop, farmers should make sure to read the labels and ensure the application window fits the fungicide label.

The mindset shift does not mean scouting can go by the wayside. Scouting is still a critical step each season for determining what and how much disease pressure you’re dealing with and planning your fungicide applications.

Farmers should also take into consideration the soybean variety or corn hybrid in a field to be treated to determine the degree of resistance to the targeted diseases.

For soybeans, Meeker says frogeye leaf spot is a visible problem that blows in from the south and can do a lot of damage. Another common problem in Meeker’s territory is Septoria brown spot, a disease that is naturally in Corn Belt soils.

He recommends following your local extension service for disease tracking and reaching out to your local LG Seeds agronomist for help getting the most out of your crops.

1. Individual results may vary, and performance may vary from location to location and from year to year. These results may not be an indicator of results you may obtain as local growing, soil and weather conditions may vary. Growers should evaluate data from multiple locations and years whenever possible.

Stay up-to-date on the latest news and agronomy tips from LG Seeds. SUBSCRIBE